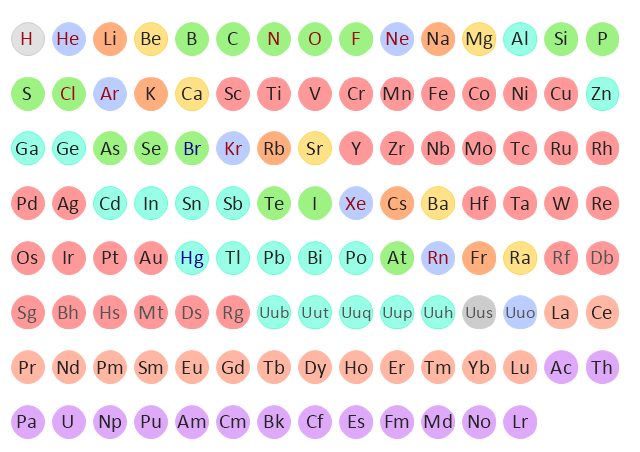 Ununbium, as is well known, has been one of the latest elements of the periodic table of elements to be synthesized by the GSI Helmholtz Centre for Heavy Ion Research in Darmstadt, Germany. Until 2010, it hadn’t received its definitive name, Copernicium, in honor of the scientist and astronomer Nicolaus Copernicus (1473-1543), with the Cn symbol. Previously, this chemical element with the atomic number 112 was recognized by its latin spelling «one-one-two», and its Uub symbol. Its physical appearance isn’t known yet, but that its 285 isotope has a medium lifespan of 0.24 milliseconds is known. To have some reference, uranium has three isotope with 234, 235, and 238 atomic weights. So we can imagine the potential of this wild foal of nature that weighs 277 time more than hydrogen and is the rarest of the transition metals.

The exasperating behavior of these transition metals, such as ununbium, leads me, justified by the disturbing discernment between a quail egg, a marble or a pea, to a deep reflection about the active inaction of determined hotels or hotel chains that have been taken for obsolete in front of the effervescence of the so called Millennium generation and low cow tourism. If we observe the behavior of ununbium and of all the central elements that make up the orbital d-block of the periodic system, we will come to the fact that this supposed stability deactivates any chemical reaction they receive because said atoms co-opt the electron they need to their last valence shell from another inner shell. At the same time, this limp layer is supplied immediately extracting another electron from the innermost shell. And so on successively. Which at the speed of light, in the interior of the atom, allows that its valence always remain the same. Not a stable equilibrium, quite contrary, in a relatively stable disequilibrium.

So we understand each other, what I take from here I place there so everything continues the same. Like life itself.

How many hotel establishments won’t be sunken into these compromises of ununbium. How many aren’t busily renegotiating their mortgages without reinventing another business model with which to face the next decade. How many don’t subtract x amount from their budget to temporarily patch leaks without losing their valence. And how many more won’t be exultant after these years of tourism records because they were the favorite ununbiums of the current financial engineering manual.

Let’s set on the behavior of the lighter and more volatile elements such as oxygen and hydrogen instead. Their atoms are in an ionic imbalance of covalent aspiration 2 and 1 respectively, but they express to each other great joy, liveliness, urgency to interact. Let’s say they’re jumpy. And, generally, they don’t require catalysts to fuse. They cooperate… Two atoms of hydrogen (H) tied covalently to one of oxygen (O) create that chemical miracle of nature that is the water molecule (H2O), source of our existence and ecological motor of all living things.

Unlike ununbium, whose stratagem of survival consists of covering up holes in a self-sufficient manner, oxygen and hydrogen need each other mutually to constitute the molecule of water. And, since they desire each other, they come together. Each electron with its mate. One of 1 weight and the other of 16. As you can see, they are not equals, but yes complementary.

Let’s think in an atomic nucleus of lodgings, different among each other, but complementary. Businesses and people collaborate, they desire each other, and come together to create a molecule of something so livening and unavoidable for the future of tourism as the hospitality of senses.